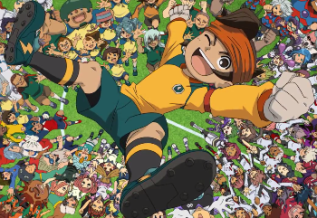 Inazuma Eleven is the hit football/soccer RPG Video Game then Anime then Manga series from Level 5. It follows the story of Endou Mamoru (or Mark Evans, if you don't like Japanese names), the spirited goalkeeper of Raimon Junior High's nearly-disbanded football team consisting of only seven members. Although Endou inherits his deceased grandfather's goalkeeping skills and love for soccer, his teammates are somewhat less motivated. Things take a drastic turn when legendary ace striker Gouenji Shuuya moves to Inazuma town. Desperate to recruit more members before the school shuts down the soccer club and also hoping to participate in the celebrated national Football Frontier tournament, Endou tries to convince Gouenji to join his team. However, Gouenji's arrival has also caught the attention of Teikoku Academy, the champion of Football Frontier for 40 consecutive years, who then proceed to arrange a "friendly match" with Raimon.

There are a total of thirteen games in the series, including:

The following tropes are common to many or all entries in the Inazuma Eleven franchise.
For tropes specific to individual installments, visit their respective work pages.
Retrieved from "https://allthetropes.org/w/index.php?title=Inazuma_Eleven&oldid=1903667"
Categories:
Cookies help us deliver our services. By using our services, you agree to our use of cookies.