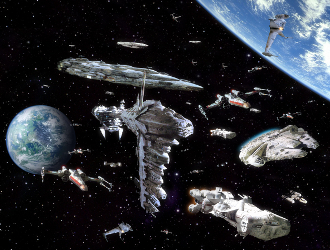 As Space Is an Ocean, naturally the space fleets in many Sci-Fi settings tend to follow the same lines as the wet navies of Earth. These are typically separated into three classes: Small Craft, Space Ships and Capital Ships.

Forms the backbone of a Space Navy. Compare/contrast Standard Sci-Fi Army, which may be on hand to fight boarding parties or conquer worlds.

To compare the size of ships from various series please use this finely crafted link for a very helpful site, that has all your Standard Sci Fi vessels in scale to one another.

These are characterized by having a relatively short endurance; unlike a 'real' spaceship, small craft don't independently travel long distances or stay in space for weeks on end. Consequently, small craft are almost always attached to a base of some sort. Furthermore, most don't have FTL, whether because it would be too expensive, a trip would take too long, or the engine would just be too big.

These are full-fledged space ships; they have the endurance to go anywhere, but aren't powerful enough to be actual capital ships (military vessels may be referred to as "sub-capital" ships). The addition of stealth/cloaking capability to any of these turns them into the equivalent of submarines, allowing writers to recycle WW2-era destroyer vs. U-boat stories, regardless of the bad physics involved.

The most powerful warships in a fleet; when people talk about fleet strength, counting capships is the quick and dirty way to do it. The presence of just one of these in an area can influence strategic calculations. These ships tend to be expensive to build. So expensive, in fact, that in "realistic" settings (well, the ones where space fleets function like WWII surface naval fleets anyway, which isn't actually realistic) they are almost never deployed without escorts and the captain will usually have an admiral on the scene to answer to in the squadron/task force/fleet. In other settings, these get treated as extra-big cruisers. Either way, unless you're in a huge fleet battle, losing one of these is a big deal. A uniquely big one may be The Mothership.

Some ships stand out due to various unique constructions or abilities, and are less noted for specific size or roles. These aren't found in every series, but appear often and are notable enough to warrant special mention:

As noted in the Army trope, the variety of these ships often varies by medium. As even with animation (traditional or CGI), making and showing a lot of stuff can be time-consuming or expensive. Therefore, many television series' or movies stick with Battlestar or Cruiser-class vessels only, while games often expand further than that.

Examples of Standard Sci-Fi Fleet include:

Trade-offs are scaled right to shape meaningful doctrine/design choices: e.g. a navy in need of modest carriers would consider Light cruiser and Heavy transport hulls. The latter has same Toughness, 2x wounds, slightly over 4x hull points, 4x cost, but is easier to hit by 2 steps and has manoeuvrability 1 step worse (so it's hard to jink). Which is better depends on the expected threats — "do not arm for war but for a war". Against long-range beams from capships, light cruisers would fare better: you won't need specific defensive systems, but try to not get hit, and then for your money have 2x total durability and a lucky hit may make only 1 of 4 ships sitting ducks - which makes one even less able to jink, after all. Conversely, Heavy transport is more viable against big swarms of missiles or small craft: they will hit anyway if not swatted, so it's worth being a fat target for 128 extra points that allow lots of point defences, power or ammo for them and/or interceptors - and if multiple hits get through this, it can repair 2 systems at once, and can go on when a smaller ship probably would be crippled or destroyed. Armored cruiser is about average of them, thus would be not too bad, but mediocre in either scenario.

Retrieved from "https://allthetropes.org/w/index.php?title=Standard_Sci-Fi_Fleet&oldid=1887923"
Categories:
Cookies help us deliver our services. By using our services, you agree to our use of cookies.