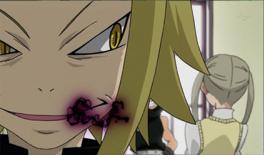 Maybe it's because she's a snake?

A character's pupils are slitted like a cat's or snake's, or rectangular like a sheep's or goat's, to indicate that they're channeling something nasty (or that they are nasty, period). Often with a red or yellow eye color to accentuate the wrongness. Also eyes have such unusual designs that they seem wrong in the worst way.

Curiously, nobody ever seems to notice this if the character isn't a known antagonist. It's a Red Right Hand to identify trouble to the audience.

Sometimes this is the Glowing Eyes of Doom with the dimmer switch turned down.

A subtrope of Technicolor Eyes and Uh-Oh Eyes. Not to be confused with evil schoolchildren.

Examples of Hellish Pupils include:

Retrieved from "https://allthetropes.org/w/index.php?title=Hellish_Pupils&oldid=1948309"
Categories:
Cookies help us deliver our services. By using our services, you agree to our use of cookies.