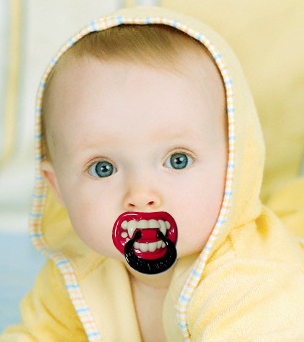 You know, fangs. Those pointy things that, whenever they're in the mouth of someone or something, indicate that they're probably evil and probably looking for an excuse to bite you with them. They're usually paired with Femme Fatalons and Pointy Ears to create a predatory look, and they're pointy. And really, what's the point in having pointy teeth if you don't do stuff with them like rip apart the flesh of the living? Opening beer cans for kicks? Removing the shrink wrap from DVD boxes?

Werewolves, vampires, and monsters in general make this trope very common. It's probably a prey animal instinct in us that never fails to feel wary about teeth that look like weapons and writers have always known to make use of a Primal Fear. Of course it doesn't help that the canines were specifically evolved for ripping and tearing flesh.

For trope purposes, this includes fangs, tusks, and an entire jaw of purposely sharpened teeth. Cute Little Fangs is the subversion of this. (Except when dealing with Sealed Evil in a Teddy Bear or other tropes for which Cute Is Evil.) May be paired with Horned Humanoid for extra points. Related to Scary Teeth.

Examples of Fangs Are Evil include: