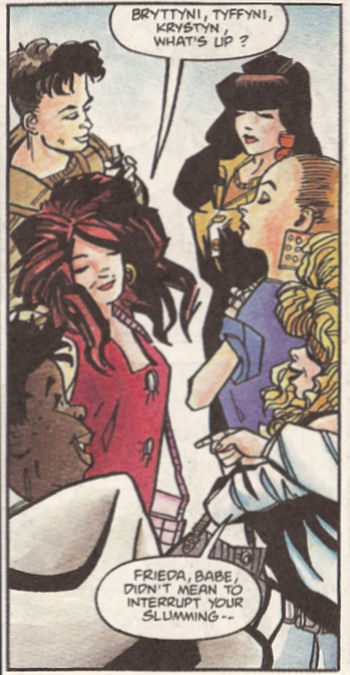 It's the one group Static can never defeat: the Insufferable Y-Wymyn!

This trope describes an intentionally bizarre or unusual (mis)spelling of one's name. It's generally done to make oneself stand out from the crowd without going to more ridiculous extremes.

This would not include traditional alternative spellings such as Jeff/Geoff or Terry/Terri/Teri, nor to simple foreign-language transliterations; the new spelling should be an obvious change from a generally-accepted way to spell it (it can, though, apply to foreign-language names which are respelled phonetically, such as "Antwan" [Antoine] or "Dontay" [Dante], although "Jeff" is one of these). Further, it doesn't often apply to surnames, as few surnames have a single, accepted spelling, but there are rare occurrences.

As a fictional trope, one would expect this to appear mostly in written works, for obvious reasons, but it can crop up in other media as well, especially if a Cloudcuckoolander gets to pick the name. It's also Truth in Television, as hundreds of babies are given "unique" spellings of traditional names each year. To some extent, it is also not, as some countries have laws about what parents can call their children. In some of these countries, your name must indicate your sex.

Sometimes characters who are Not Quite Human have exotic names that are oddly similar to Real Life names as a result of a Fantasy Counterpart Culture.

For added comedy value, this can lead to Psmith Psyndrome.

Contrast Spell My Name with an "S", where the misspelling is unintentional. (If it's a variation on a foreign name, though, they can coexist.) Spelling of something other than a name by the writer is probably Phantasy Spelling.

Compare Xtreme Kool Letterz, It Is Pronounced "Tro-PAY", and Translation: "Yes" in the case of unpronounceable names.

Examples of My Nayme Is include:

Retrieved from "https://allthetropes.org/w/index.php?title=My_Nayme_Is&oldid=1966215"
Categories:
Cookies help us deliver our services. By using our services, you agree to our use of cookies.