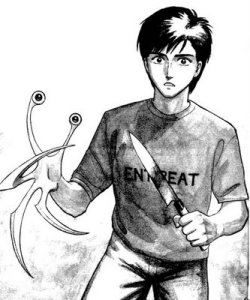 Parasyte is a Seinen Manga written by Hitoshi Iwaaki, and is particularly famous for its usage of Body Horror.

One night, strange spores fall from the sky onto the earth. They spawn out weird little worms that quickly infiltrate human infrastructure, looking for host bodies. The worms (their parasites) crawl or burrow their way into the head of a human host, transforming it and the brain inside. This effectively kills the victim, replacing the host's personality and intellect with that of the Parasite. The Parasites have a ravenous appetite for the flesh of the species they take over - in this case, human flesh.

But one specific worm goofs it up - instead of ending up in the brain of the intended target, an Ordinary High School Student named Shinichi, the parasite instead ends up living in Shinichi's right arm. The little guy is called Migi (Japanese for right), and because of this unique situation, Shinichi and Migi are sharing the same body, but still possess their own individual intellects. This gives them an edge in battling the other Parasites, who see Shinichi's ability to think independently as a threat. Shinichi also feels compelled to fight other Parasites, who kill and eat humans as a source of food, whereas Migi, like other Parasites, is incapable of emotion and only fights to preserve his own life. And so, Shinichi is forced to deal with all kinds of teenage issues while keeping a horrifying secret and having to battle against hordes of other Parasites who want to use him (like Reiko Tamura, a scientist and Shinichi's teacher), kill him (just about everyone else) or worse.

Parasyte was first published in North America by Mixx (now better known as Tokyo Pop) where every character was Americanized by changing their names (for example: Reiko Tamura was renamed Tamara Rockford, while Migi was "Lefty" because the pages were reversed); mild censorship of sexual elements (though the gratuitous violence was left untouched); and many cultural differences being waved away. Later, Del Rey got publishing rights to the series and re-released it, reverting the changes Mixx made and using a more accurate translation. There's also a Live Action Adaptation supposedly in the works.

Tropes used in Parasyte include:

Retrieved from "https://allthetropes.org/w/index.php?title=Parasyte&oldid=1831175"
Categories:
Cookies help us deliver our services. By using our services, you agree to our use of cookies.