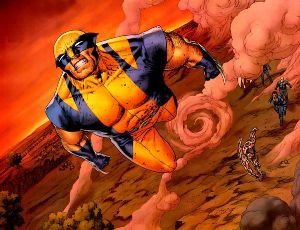 Wolverine, I choose you!

Want to make a dramatic entrance into melee combat? Here's one way to do it. A character (usually The Big Guy) will pick up an ally (usually The Hero, maybe The Lancer or even an action-oriented Chick) and hurl him headlong into the enemy (often a group of Mooks).

Often used as an alternative to the Colossus Climb. A staple technique of the Bash Brothers. This should be between two allies; hurling enemies into each other is something else, and hurling enemies at your friends is just not nice.

The maneuver is famous enough for That Other Wiki to have an article about it. For the self-propelled version, see Dynamic Entry. For being launched into combat by a siege engine, rather than another person, see Catapult to Glory. For other forms of person-based combat, see Grievous Harm with a Body and Equippable Ally.

Examples of Fastball Special include:

Retrieved from "https://allthetropes.org/w/index.php?title=Fastball_Special&oldid=1943351"
Categories:
Cookies help us deliver our services. By using our services, you agree to our use of cookies.