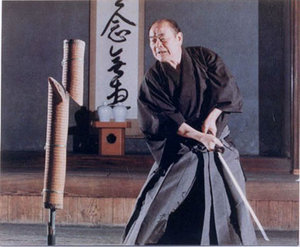 A swordsman strikes an opponent or other object with a mighty blow, almost always on a diagonal—from shoulder to opposite hip if the target is human(oid). For a moment, nothing appears to happen. A few seconds later, though, the top half of the object begins to slide off the bottom half: through great strength, great skill, the legendary virtues of the sword, or a healthy dose of Applied Phlebotinum, the sword has neatly cloven the object in two with a single blow. If the cloven object is a person, they may laugh for a moment before a shocked realization and then slide apart.

Disconcertingly, the actual depth of the object that's being sliced never affects the outcome of this move. It's possible to Diagonal Cut items that greatly exceed the length of the swordsman's blade, such as cars, sequoias or in extreme cases entire buildings.

A variety of Clean Cut, and compare Single-Stroke Battle; this is a slightly more over-the-top version, and applies to inanimate scenery, too. Razor Floss tend to deliver Diagonal Cut once per show for extra shock value and/or bonus awesomeness, then Clean Cut is toned down back to more believable forms.

Bonus points if nothing happens until the sword is resheathed.

In real life, it is possible to accomplish this on humans, albeit without the dramatic delay before the target falls apart or the amazingly clean cuts that are seen in the movies (at least on most targets). Its also rare for targets to be cut straight through—armor and bones are harder to cleave through than flesh. In fact, in iaido, the diagonal cut (kesa giri) is one of the basic strokes, where the intention is indeed to cut from the shoulder to the opposite hip, and at more advanced levels, practitioners actually practice doing this to rolled up tatami mats and other inanimate objects.

Incidentally, a recent survey of battlefield grave sites in Japan, analyzing skeletons for cause of death, found kesa-giri to be the most common by far. There were hardly any examples of fatalities from a straight downward slash (the favoured move in Kendo).

In European swordfighting, this (the Zornhau, or "wrath hew") is also one of the basic strokes. And European battlefield casualties from Medieval times do indeed, just like the Japanese example above, show the same kind of injuries. Which is easy to explain, since the head, pretty hard by itself, was the first thing to be covered with armor, so shoulders provided the only bodypart to aim at with overhead swings.

All Japanese swords are supposed to be able to do this. Historically, a swordsmith could only become licensed if a swordsman could perform this cut on a dead body with a sword forged by that smith. (Or on a condemned criminal. Nice guys, those feudal Japanese.)

On a practical level, most swords are slashing weapons. Sure you can stab a guy with one, but during the eras when swords were the in-thing, you normally wouldn't want to. There are rather fewer ways of stabbing someone to death than you might think, and it only gets worse when that someone is armored and fighting back. Stabbing also very heavily commits you to attacking while well aimed slashing turns into blocking rather easily. It wasn't until gunpowder was all the rage and armor became pointless that foot-fighting swords became slim and stabby. A well-wielded rapier can beat just about any other blade because its fast enough to avoid being blocked, but that's only helpful if there is an abundance of easily accessible fleshy bits to stick it in.

Historically speaking, if you want to stab people, you want to get yourself a spear of some sort. The range involved means you can stab a bunch of times with a lot of force while the other guy is too far away to do anything about it. The only armies that relied on stabbing with swords (and even then not on swords as a primary weapon) were the Spartans and Romans, the notable parallel between them being large shields, all over armor, very short swords and total disinterest in fighting fair. Accurately stabbing someone in the heat of battle is a lot more plausible when you've just concussed him with your shield.

Someone has cut together a reel of many notable examples of the diagonal cut. Be warned, however, 4 minutes of people getting sliced up, even in Hollywood-improbable circumstances, can be a little unsettling. However, it may also be a hilarious example of how this trope should probably be limited to animation. Further, it shows that something used too often can lose its effect very quickly.

Examples of Diagonal Cut include:

Retrieved from "https://allthetropes.org/w/index.php?title=Diagonal_Cut&oldid=1894652"
Categories:
Cookies help us deliver our services. By using our services, you agree to our use of cookies.