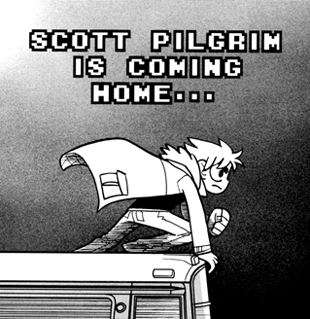 Something bad has happened to our character. Really bad. It's shaken his faith in himself and in everything else. He may have hit the bottle. He's letting his enemies walk all over him as he rolls around in self-pity and despair, like Achilles in His Tent.

But it's not going to last. Our hero is going to shake off his funk and become the man he used to be. After that, we will never mention his low times again. This is sometimes triggered by some sudden threat he must rise up to face, but when it's done well, it's really more the result of a long healing process finally reaching critical mass. Therefore, the sudden threat is generally used in tandem with a Ten-Minute Retirement, whereas Hes Back more properly describes the end of a character arc, but the distinction can be blurry, such as in cases in which the Ten Minute version falls across a season break. He's Back is not usually the result of a Whoopi Epiphany Speech, but is often the result of a Bright Slap.

Works best if the tragedy was on-screen, but sometimes this is relegated to his backstory. Also, emotional impact is maximized if the character in question is The Woobie.

Often timed to coincide with a Rousing Speech. It could also be punctuated with a World of Cardboard Speech just for good measure.

Should be the climax of a long-term character arc, but a lightweight version happens at the end of, eg., a Ten-Minute Retirement.

He may have been down, and maybe you counted him out, but now he's back, and it's about time.

The distinguishing mark between Ten-Minute Retirement and Passing the Torch. The 'good' ending of We Used to Be Friends.

Not to be confused with a character who has returned from being Put on a Bus; the trope you're looking for is The Bus Came Back. This character was never actually "gone", just out of commission until this moment.

Examples of He's Back include: