Reality Is Out to Lunch 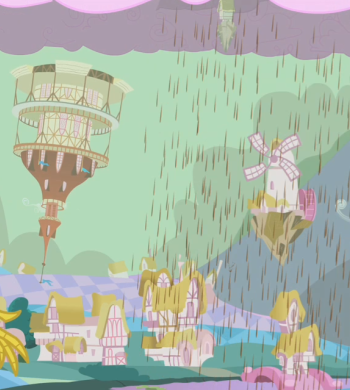 As far as we know, reality is pretty much fixed.[1] We don't randomly sprout limbs, float into the air, or turn into foot stools. Not so here. There is an area, or at least a circumstance, of the setting that throws the laws of physics in the air and plays merry hell with the established rules of reality. This is not always as funny as it sounds; remember, the same laws of reality that keep your friend from spontaneously turning into a camel are also the same laws of reality that keep your lungs on the inside of your body. As such, regular exposure is not recommended, as you may get... altered.

Sample conditions of a place where reality is out to lunch include Alien Geometries (constant relation between skull volume and its surface is a good thing to have) and time dilation.[2] Perspective Magic is another common trick. A Reality Warper has this as a superpower. Related to Hyperspace Is a Scary Place, only the place in question isn't necessarily used for travel purposes. See also Eldritch Location, where this often happens, and World of Chaos for when the effect is so widespread it makes up the whole of existence. May result in someone Giving Up on Logic. Fairly common, or at least not out of the ordinary, in Surreal Horror.

Examples of Reality Is Out to Lunch include:

Retrieved from "https://allthetropes.org/w/index.php?title=Reality_Is_Out_to_Lunch&oldid=1592240"
Categories:
Cookies help us deliver our services. By using our services, you agree to our use of cookies.