Hyperspace Is a Scary Place 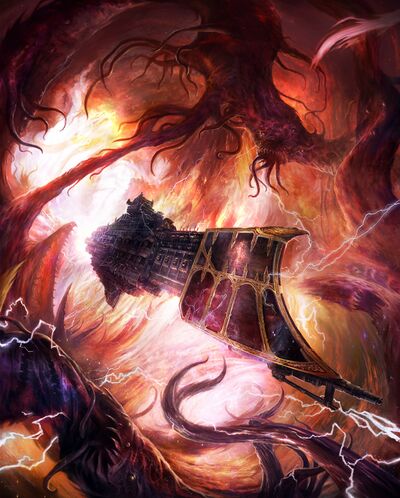 Shield me from the maelstrom, prove this ship worthy of protecting Your legions, who bring Your light wherever they travel.

There are very few things about space that are not freaky. Contemporary space shuttles rode pillars of fire and launching one involved spraying 1100 cubic meters of water on the pad as a muffler to keep the craft from being damaged by the noise. Works such as Robert A. Heinlein's The Moon Is a Harsh Mistress and Larry Niven's short stories have pointed out that (barring Teleportation) convenient real-space travel between planets has energy requirements on the same order as making significant holes in them. And let's not even get started on the whole 'infinite void of nothingness between the stars' aspect. Anything with the power to thrust people across light-years rightly should scare their astropants off.

Hyperspace, being Another Dimension or close, sets aside the natural laws that our universe and biologies need. It's sure to be mind-bendingly different and hostile to conventional life—even more so than the void of space itself. Clearly marked paths may be slightly safer, or ships may generate a safe field around themselves while travelling. If it fails, the ship is at best returned to normal space, or at worst the passengers are exposed to incomprehensibly fatal horrors. Authors will often take the time to point out that hyperspace is hazardous and fraught with peril, for both the characters and the ships that have to make passage through it.

But long dissertations on it sometimes just don't make this clear. So, to really make a point about how dangerous and scary hyperspace is, they throw some really weird, scary stuff into their vision of it.

It might cause those who look upon it directly to Go Mad from the Revelation (so keep those view ports shuttered tight), and/or infested by Eldritch Abominations that would have even H.P. Lovecraft reaching for the absinthe. If Space Is an Ocean, Hyperspace is that part of the map marked Here There Be Dragons.

Examples of Hyperspace Is a Scary Place include:

Retrieved from "https://allthetropes.org/w/index.php?title=Hyperspace_Is_a_Scary_Place&oldid=1948381"
Categories:
Cookies help us deliver our services. By using our services, you agree to our use of cookies.