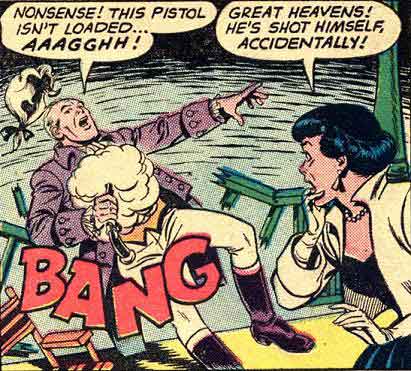 This is why you're supposed to treat the gun as loaded. Now you know, And Knowing Is Half the Battle.

Guns are dangerous. That's why there are various rules for safely handling them. When these rules are not followed, whether it be by experts or untrained John Q Public there's a chance for an accidental discharge. That's when somebody gets shot. Sometimes in the face. Being named Marvin is rare, however. Either way, it's not funny the same way that Juggling Loaded Guns is, because somebody just got shot.

This trope occurs when somebody didn't follow the Gun Safety requirements or simply has a shoddy weapon that goes off, hurting, killing, or destroying a lot of property, and the gunshot is not played for comedy.

It gets better when the accidental shootings that result from this mishandling of weapons are plot points, as these kinds of accidents are precisely why the safety rules are in place.

The precise rules on the safe operation of firearms vary from one organization to another, but the most common points can be read at our Useful Notes on Gun Safety page.

This trope is named after Vincent's line in Pulp Fiction after he exhibits staggering incompetence with basic firearms safety, resulting in things getting worse for him and Jules, and much worse for Marvin. (See the entry in the Film examples for details.)

This is frequently the result of some combination of Reckless Gun Usage, Artistic License Gun Safety, and Reliably Unreliable Guns. Compare Juggling Loaded Guns for when somebody getting shot by accident is due to Rule of Funny.

Examples of I Just Shot Marvin in the Face include:

Retrieved from "https://allthetropes.org/w/index.php?title=I_Just_Shot_Marvin_in_the_Face&oldid=1884250"
Categories:
Cookies help us deliver our services. By using our services, you agree to our use of cookies.