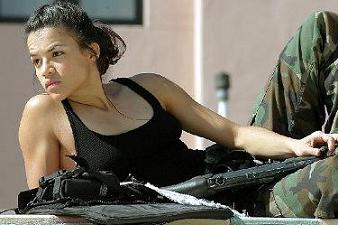 Latin women in media (particularly American media) are usually portrayed as sultry temptresses with fierce tempers. The old westerns and pulp fiction usually depicted them as raven-haired, olive-skinned, and red-clad, with an accent that can melt butter. Modern portrayals, however, are usually more urban.

This character is very Hot-Blooded and confrontational, and often times has a rough background where they had to learn to defend themselves. They usually display an almost Tsundere-ish quality of having a soft side that occasionally peeks out from their tough exterior. Expect the Spicy Latina to be a good fighter who can take care of herself, which ironically can lead to her becoming the designated early casualty. There's also a crossover with Mama Bear in some cases. The Spicy Latina can make for a great Femme Fatale for The Hero. Even if the Spicy Latina is a bit tomboyish, she will be irresistible. If not tomboyish, she's usually wearing a lot of sexy tight clothing and she would happen to be very flirty and sexual. Despite this, she is often a devout Catholic.

Important Note: just because a Latina character is attractive does not neccessarily make her a Spicy Latina. A Latina played as a down to earth Girl Next Door or a bubbly Brainless Beauty is not an example of this trope because such a character lacks the attitude and personality of the Spicy Latina. Please keep this in mind while adding examples.

No real life examples, please; real people are not defined by a single trope. Also, this is a trope about how characters are depicted in media.

Examples of Spicy Latina include:

Retrieved from "https://allthetropes.org/w/index.php?title=Spicy_Latina&oldid=1652893"
Categories:
Cookies help us deliver our services. By using our services, you agree to our use of cookies.