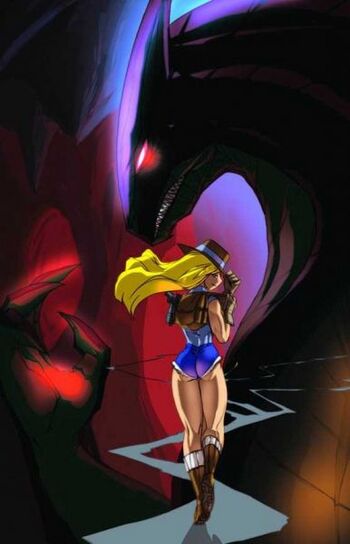 Gold Digger is a long-running US comic from Antarctic Press with manga-inspired art, written and drawn by Fred Perry. The first appearance of the characters was in the anthology title Mangazine Vol. 2 #11 (September, 1991). They then got their own eponymous 4-issue miniseries (September 1992-March 1993). This proved successful enough to make Gold Digger Vol. 2 an ongoing. 50 regular issues were published between July 1993 and June 1999, plus a number of annuals. These issues were mostly in black-and-white. The series was then relaunched as a full-color series. Vol. 3 started in July 1999 and is still ongoing.

The story centers around the adventures of the kind, nerdy, and idealistic Hot Scientist inventor, archaeologist and explorer Gina Diggers; and her Boisterous Bruiser, fashionista, were-cheetah adopted sister/bodyguard, Britanny "Cheetah" Diggers, as they search the world (and others) for relics of the distant past.

The third sister, Brianna, is the goofy mental and physical combination of Gina and Britanny, accidentally created in the process of removing a curse gained during one of their adventures. She combines Gina's thirst for mysteries, scientific acumen, and libido with Britanny's low attention span and thirst for action, fashion, or entertainment (plus a portion of her werebeast strength). Hence, she likes action-technology of any kind, especially if explosions are involved. She is usually accompanied by her trademark childlike little Peebo robots.

If, as the name and the Adventurer Archaeologist trope implies, the sisters seem more intent on digging up valuable treasures to fund their lifestyle than searching for actual knowledge, they invariably make up for it by becoming unwitting heroines in the process, usually with the help of their friends, and with time, Gina evolves into more idealistic Pillars of Moral Character material.

It is popular enough to have several spin-offs, usually four-issue miniseries.

Fred Perry also began working on an independent OVA based on the original "Time Raft" pilot story since 1999. He basically did everything except for the voice acting and music composition, while still producing the main series. The last part of story was finally completed and released in 2010.

Not to be confused with the (completely different) character archetype -- even though that very trope is a derisive (and largely undeserved) In-Series Nickname for Gina.

Tropes used in Gold Digger (Comic Book) include:
Retrieved from "https://allthetropes.org/w/index.php?title=Gold_Digger_(Comic_Book)&oldid=1748924"
Categories:
Cookies help us deliver our services. By using our services, you agree to our use of cookies.