Everything About Fiction You Never Wanted to Know.
(Redirected from Tron)
Jump to navigation Jump to search 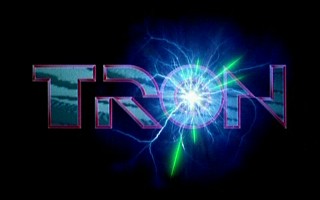 A world inside the computer where man has never been. Never before now...

Videogame developer Kevin Flynn, trying to prove that a Corrupt Corporate Executive has stolen his videogame programs, is sucked into the digital world inside the computer, where anthropomorphic programs are consigned to fight for their lives in gladiatorial games. With the help of Tron, an independent security program, Flynn must try to destroy the evil Master Control Program from within, bringing liberty to the cyber realm, and find a way of returning himself to the real world.

Although computer-generated special effects had appeared in film as early as 1974, TRON (1982) marked the first time that computers were used to create something "real", rather than to just represent computer graphics (sort of "real", anyway, since the story takes place inside a computer). Ironically, a large portion of the special effects in TRON were actually hand-drawn; even the computer-generated objects and environments had to have their geometry entered by hand for every frame, since no practical method of automating the process existed at the time. In general, the light cycles, tanks, recognizers and the Solar Sail were CGI -- however the huge amount of processing time required versus how much was available at the time required that they be rendered in black and white and hand-colored later.

Despite its bold look and bolder ambitions, especially for how the Walt Disney Company which was sinking further into irrelevance at that time, TRON was a commercial disappointment (it didn't lose money, but wasn't the hit they had intended it to be). To add insult to injury, the Academy of Motion Picture Arts and Sciences considered it "cheating" to have used computers to create the special effects, resulting in the film not getting nominated for Best Special Effects. TRON's failure put CGI development on the back burner for years; while a few later productions made use of CGI elements (Young Sherlock Holmes, Flight of the Navigator and, most notably, The Last Starfighter), it would not be until 1989's The Abyss, and later 1991's Terminator 2: Judgement Day and 1993's megahit Jurassic Park, that computer-generated effects would become feasible in the eyes of Hollywood and the public. This development and the film's persistent cult fandom would cause the film to be popularly reevaluated as a bold experiment in computer visual effects.

TRON appeared as a level in Kingdom Hearts II (the game director's admitted first choice for the series, but couldn't find a way to put it in the first game).

TRON has spawned two (mutually exclusive) sequels, the 2003 video game Tron 2.0 (in which Alan and Lora's son Jethro is transported into the cyber-world) and the continuity consisting of (in order of publication) the film Tron: Legacy, the graphic novel TRON: Betrayal, the video game Tron Evolution, and the television series Tron Uprising.

Tropes used in TRON include:

Flynn: On the other side of the screen, they all look so easy!

Gibbs: You can remove men like Alan and me from the system, but we helped create it. And our spirit remains in every program we designed for this computer.

Flynn: [while driving the recognizer] Pretty good driving, huh?
[He crashes into several things]
Bit: No! No! No! No!

Flynn: I never should have written all those tank programs.
Flynn: Now that is a big door!

Ram: You're a... (pauses, thinks for a moment, stands up and walks over to the wall to lean against it while half-smirking) ...guest of the Master Control Program.

Tron: If you are a user, then everything you've done has been according to a plan.
Flynn: Heh heh, you wish! You guys know what it's like... you just keep doin' what it looks like you're supposed to be doin', no matter how crazy it seems.
Tron: That's the way it is for programs, yes.
Flynn: I hate to disappoint ya, pal, but most of the time, that's the way it is for users, too.

Master Control Program: Remember all the times we spent playing chess together?

Tron: You forget how good the power feels... until you get to a pure source!

MCP: Sark, all my functions are now yours!

Sark: I don't know you survived, slave! It doesn't matter! Prepare to terminate!

Dumont: What do you want? I'm busy!
Sark: Busy dying, you worn-out excuse for an old program?
Dumont: Yes, I'm old... old enough to remember when the MCP was just a chess program. He started small and he'll end small!

Ram: (on the MCP's directives) If he thinks you're useful he'll take over all your functions so he gets bigger.