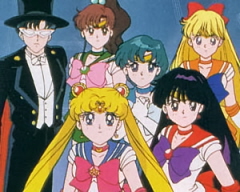 The one on the left.

That's short for "The one guy associated with a team otherwise consisting entirely of females." No need to get rabid jealous, though, guys—this isn't the Harem Genre. At the most, The One Guy will be in a committed relationship with one of the members—or he wants to be. His membership can range from loose ally to close friend to part of the actual fighting team. Either that, or just some guy who rarely ever actually does anything other than serve as eye candy for the female viewers. He will usually be involved in plots that require guys, as well as be a non-threatening and harmless crush object for the assorted cast as needed. Could become The Face of the group if they have exceptional social skills.

The Spear Counterpart to The Smurfette Principle. Occasionally The Ditz, or serves the same purpose of rounding out the cast as The Face, and for equally uncertain reasons is less likely to occur on evil teams.

Remember, not all characters who serve as the only male in the group automatically count for this trope. If he is the main protagonist, he does not count as this trope.

Not to be confused with That One Guy or Those Two Guys, and unrelated to My Hero Zero.

Examples of The One Guy include: