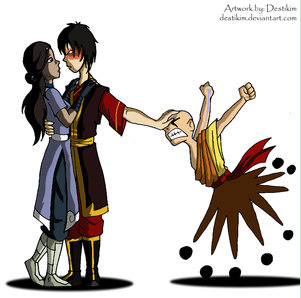 Unrelated discussions degenerate into Ship-to-Ship Combat involving them. Fan Art of them embracing passionately is everywhere. Threads dedicated to gushing over their sweet, fluffy, legendary love and scorching hatred of anyone in the way dominate forums. Bits of trivia are cited and Word of God is creatively interpreted to show that they are going to happen. The Official Couple they're breaking up gets only three votes in fan support polls, possibly including one vote cast by a very alarmed author. They are a phenomenon shrouded in infamy.

And still yet, in spite of it all, they are not happening. Certainly not now, and probably not ever.

A subreaction of Better Than Canon. Most often the result of a Romantic False Lead Gone Horribly Right due to Emotional Torque critical mass, but sometimes happens by design or because fandoms just make no sense. Often, but not always, involves disregarding a competing Official Couple with extreme prejudice. Can eventually lead to an Author's Saving Throw or a Writer Revolt.

The highest aspiration of a Fan-Preferred Couple is to beat the odds and evolve into an Official Couple. This is about the only way the same couple can end up being both of these things.

READ BEFORE ADDING AN EXAMPLE

When left alone, this page very quickly decays into its natural state of equilibrium: Everyone listing huge Walls of Text about their favorite ships. We don't want that. Here are some guidelines for what examples you put on this page and how.

Examples of Fan-Preferred Couple include:

Retrieved from "https://allthetropes.org/w/index.php?title=Fan-Preferred_Couple&oldid=1946622"
Categories:
Cookies help us deliver our services. By using our services, you agree to our use of cookies.