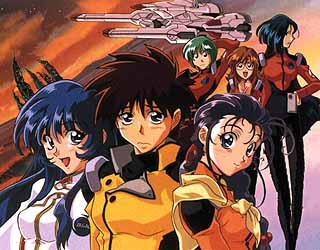 Martian Successor Nadesico is a sprawling Space Opera with a subversive sense of humor about its own genre.

Several centuries in the future, Earth is at war with an alien species — propagandists take advantage of the fact that no one has ever seen one by dubbing them "lizards," and everyone knows that Reptiles Are Abhorrent — that fights entirely by remote controlled robots and ships sent from Jupiter via immense hyperspatial gateways. The war is going badly for Earth when a defense contractor, the Nergal Corporation, decides it's going to cut out the middleman and field its own space battleship, the Nadesico. Of course, it crews the ship almost entirely with a classic oddball gang of civilians. As captain, Nergal selects Genius Ditz Yurika Misumaru, daughter of Earth's head admiral.

Yurika's childhood sweetheart, Akito Tenkawa (a burnt-out, traumatized ex-mecha pilot who can't remember how he got to Earth after the fall of the colonies on Mars) joins the crew mainly by accident. Although he wants only to be a chef in the ship's galley, he is repeatedly forced to use his piloting skills in defense of the Nadesico.

Over the course of the series, the ship and crew go through bright times and dark, joy and sorrow, defeat and victory. Conspiracies are uncovered, secrets are learned, and the true nature of the war—and of man's destiny in the solar system—are revealed.

While it revels in being a classic "space war with giant robots" story, it also parodies the genre, both overtly and subtly. One of its most famous devices is Gekiganger 3, a classic 1970s-style Super Robot anime Show Within a Show. Although G3 seems at first only a device for cheap laughs, it slowly becomes not only a sly commentary on the main action, but also a major element of the plot in and of itself.

Originally licensed by ADV Films, it was recently[when?] re-released by Nozomi Entertainment.

Tropes used in Martian Successor Nadesico include:
Retrieved from "https://allthetropes.org/w/index.php?title=Martian_Successor_Nadesico&oldid=1899268"
Categories:
Cookies help us deliver our services. By using our services, you agree to our use of cookies.