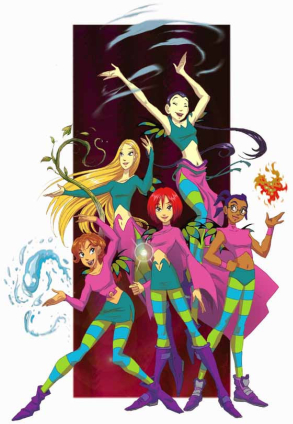 Based on an Italian comic book. This show aired on ABC Family and Toon Disney's Jetix block and decided to try something else from the typical comic book adaptations at the time. It re-imagines the first two story arcs of the comic, tying them together and making them one central, stand-alone, connected plot-line told in the show's serial narrative. To some fans' regret, however, this results in them changing a few things around. Greg Weisman, creator of Gargoyles, was a showrunner during the second season.

On the distant planet of Meridian, a tyrannical young man named Phobos has acquired the royal throne and begun his crusade to spread his reign over all other planets in the universe. In order to counter his ambitions, a magical wall, known as the Veil, was created in order to seal Meridian away from the rest of the universe. However, over time, the Veil has begun to deteriorate, creating tears in the fabric of space which turn into portals, allowing free passage between Meridian and Earth. On Earth, five young girls are recruited to become the Guardians of the Veil, a group of super-powered defenders who are tasked with keeping order in the universe and acting as the protectors for all planets in the various galaxies of space. To do this, they must maintain the Veil by closing the portals.

Soon into their Guardianship, they encounter Caleb, the young leader of a rebel army on Meridian. The rebel army opposes Phobos' rule, as Meridian is a matriarchal planet, and he tells the Guardians that the rightful heir to the throne, Phobos' sister, is hidden away somewhere on Earth, and now that the Veil is weak enough to pass through it, both the rebels and Phobos are racing to find the heir located somewhere on Earth. As they work together to search for the rightful heir to the throne, the Guardians slowly begin to learn that other forces are at work behind the scenes, manipulating and coercing various events involving the war on Meridian, and that everything and everyone they encounter is not what they appear to be.

The five girls (whose initials spell "Witch") form a classic Five-Man Band, plus a sort-of Sixth Ranger (one of the Meridian rebels, who's pretty much there from the beginning), a Mentor (grandmother of one of the girls from a previous team, CHYKN), and a Non-Human Sidekick (a goblin-like smuggler from Meridian who is both cute and utterly gross) which sounds fairly standard, but the show distinguishes itself by clever plotting, writing, and bold attempt at creating a series with a centralized plotline that develops each episode with little-to-no filler episodes. Most of the episodes revolve around chess-like maneuvers between the villains and the girls, and the girls start out on the losing side of the war, and must slowly build up their victories. However, they tend to lose more often than they win due to the villain's cunning intelligence, but the plot still moves one step closer to its conclusion.

This show is also notable for totally avoiding many tropes found in the action genre. One example is the Sorting Algorithm of Evil; neither Phobos' minions or the girls get any more powerful, or visibly better at using their powers. Instead, the Character Development comes from how both sides treat their war. The girls initially treat their missions like a game or a nuisance, and get much more serious with time. Both the girls and Phobos get much smarter, too. Early episodes have the girls making Keystone Kops blunders in trying to hide their secret, while the bad guys make ham-fisted attacks. By the end, both the girls and Phobos are incredibly sneaky. The second-season avoids it as well, even though the girls get some upgrades and neat new powers, they still have trouble beating the season's Big Bad Nerissa, even though she's arguably weaker than Phobos. The trouble the girls have stems from Nerissa's uncanny scheming ability. The girls never match Nerissa in terms of strength, so they must rely on their wits to outsmart her. Unfortunately, Nerissa tends to be the one outsmarting them and leading them right where she wants them.

Tropes used in W.I.T.C.H. (TV series) include:
Retrieved from "https://allthetropes.org/w/index.php?title=W.I.T.C.H._(TV_series)&oldid=1874017"
Categories:
Cookies help us deliver our services. By using our services, you agree to our use of cookies.