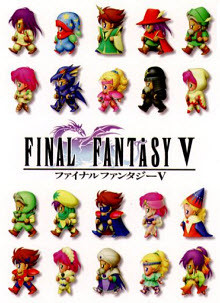 "Enough expository banter! Now, we fight like men! And ladies! And ladies who dress like men! For Gilgamesh... IT IS MORPHING TIME!"
—Gilgamesh

The fifth entry into the bladder-weakeningly popular Final Fantasy series.

The story, while being almost ridiculously simple compare to other installments, is nonetheless well-loved for being just plain fun. It involves a world where the forces of nature are sustained by four magical crystals. When a mysterious force starts destroying the crystals, several strangers join forces to prevent it. They gain powers from the spirits of ancient heroes contained within the crystals (thus explaining the job-changing system). These heroes (who are the game's playable characters) are:

The heroes discover that the destruction of the crystals is part of an evil sorcerer's plan to obtain the "ultimate power". Their adventures will actually take them to other worlds, and reveal the very origins of their universe.

This game featured the return of Final Fantasy III's job class system, as all your characters were basically carbon copies of one another in battle (Each character has his or her boost of 2-4 points in a stats, but it doesn't really affect anything beyond who moves first when sharing a job). You were allowed to assign them various jobs (Knight, Dragoon, White Mage, etc.) to give them varying skills. As expected, it was a Thief's job to steal, a Summoner's to summon, etc. This was also the first incarnation of the job system that let you assign skills "learned" from other jobs to the character regardless of current job. Mastering any job would give the character all of the job's passive skills (Counter Attack, Sword Clap, Dual-Wielding) and stat boosts when switched back to "freelancer/bare". Active skills such as magic would still need to be equipped.

At its time of release, Squaresoft was hesitant to release Final Fantasy V outside of Japan, believing the game to be far too complicated for western audiences. At one point, there were plans to release the game as Final Fantasy Extreme, being specifically marketed as a "hardcore" Final Fantasy game to contrast Final Fantasy Mystic Quest, a game created specifically for the western market. The original Super NES version was only available to the English-speaking fandom as a fan-translated ROM, and when it finally received a PS 1 release, the terrible loading times and Blind Idiot Translation pretty much prevented anyone from really enjoying it the way it was meant to be enjoyed. The GBA version finally gave us a great translation that runs with the story's lack of seriousness with added humor (see page quote for an example), fixed what needed to be fixed and, along with Bartz's and Exdeath's appearance in Dissidia Final Fantasy, made Final Fantasy V's increasingly positive reception possible.

Final Fantasy V is also one of the few games of the main series, and certainly the earliest, to have its universe expanded. In 1994, a four episode OVA entitled Final Fantasy: Legend of the Crystals was released, set 200 years after the events of the game and focusing on Bartz's descendant.

Necrophobe: Enough of this! Now die! *hits Gilgamesh with Flare for minimal damage*
Gilgamesh: *snort* I believe that's MY line! *Self-destructs for 9999 damage*

Galuf: Listen up - before you knew me as a king, you knew me as a friend. Just "Galuf" is fine.
Bartz: Understood, Just Galuf!
Galuf: ...Don't push it, kid. Here in Bal, bad jokes like that will get you PUNished...
Bartz: *groan*

"Wouldn't chocobo racing be totally extreme? ...No, I guess not."