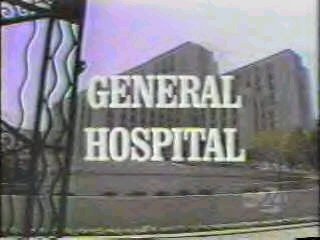 The action, ostensibly, centers on the staff and patients at General Hospital in Port Charles, New York. Early characters of importance were Dr. Steve Hardy, his nurse wife, Audrey, nurse Jessie Brewer, Dr. Lesley Webber, and attorney Lee Baldwin. Many current characters are children and grandchildren of these veteran characters.

General Hospital's ratings slouched in the mid-1970s and the show faced cancellation. It was invigorated by the beloved (but controversial) pairing of Laura Webber Baldwin and Luke Spencer, a romance infamously spawned after Luke raped Laura at the Campus Disco in 1979. The rape was retconned as a "seduction" and the pair became the original soap opera Super Couple.

By the early 90's, the focus shifted to more family-based drama. The show got high marks for tearjerker stories such as Stone's death from AIDS, and young Maxie Jones receiving her cousin BJ's heart in a transplant.

The past decade has been dominated by mobsters Sonny Corinthos and Jason Morgan. Most of the show's long-term fans have been alienated by increasingly dark stories and a growing trend of killing off veteran characters, supposedly to attract a younger audience.

Tropes used in General Hospital include:
Retrieved from "https://allthetropes.org/w/index.php?title=General_Hospital&oldid=1832274"
Categories:
Cookies help us deliver our services. By using our services, you agree to our use of cookies.