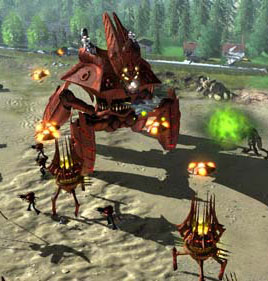 They come in Tripods!

Universe At War: Earth Assault, is a RTS made by Petroglyph Games.

The game begins when in 2012, humans notice something alien and really big on a collision course with Earth. They prepare for a heroic defense but are beaten to a pulp by the Hierarchy, a race of Planet Looters who have consumed thousands of worlds before Earth. Just when it seemed like all was over, the Novus, a race of machines straight out of a Manga, appear. These guys have a grudge against the Hierarchy, who destroyed their creators, and will take any chance they can get to avenge them.

Everything is going swell for the Hierarchy though, since the whole invasion was a trap for the Novus. Then, an unnamed idiot in their ranks tripped over a pyramid and awakened the Masari, Ancient Astronauts that were once the uplifters of the Hierarchy (who repaid them by driving them to near-extinction). They decide to battle it out with all the factions at once, but in a undramatic turn of events, the Masari wind up uniting with the Novus and what's left of humanity, and end the Hierarchy threat... for now, at least.

The game was created by the same minds that put together the first Command & Conquer games, and while it's rather buggy (unless patched), relatively unknown, and uses that bane of gaming known as Windows LIVE, it's still an enjoyable, hammy and Troperiffic little game. Needs More Love.

Tropes used in Universe At War include:

"I am Orlok, Commander of the Hierarchy battalions, General of the Galactic Fleet, Annihilator of a thousand worlds, and you are no longer a god of mine!"

Zessus: "I met a new hero who inspired me: General Peasant of the Humans."
General Moore: "The name's Moore... and I suppose you're the... tooth fairy in all this?" (Keep in mind he's mouthing off to the most powerful Masari, their queen).

"Commander Orlok! These noble intentions of ending bloodshed, an alliance with a fallen enemy; all very ambitious of you!... And if we were a race of FLOWERS it would be rewarded!"

Advisor: Commander, they're retreating.
Orlok: They must think we have reinforcements. Let's get some before they find you we don't.

Kamal: You forgot the first rule of the Hierarchy, commander: trust is a weapon, not a guarantee. Your spy was always MY spy.

"It was said the Masari could create energy from nothing!"