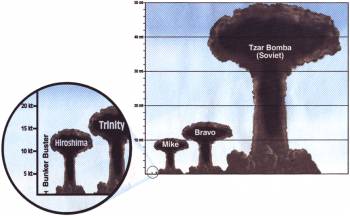 Dr. Sign: Lynn, what is the one and only way to prevent being killed by the explosion of a nuclear weapon?
Lynn: I dunno, don't be there when it goes off?

A specific type of MacGuffin. It is a thing that is just really, really bad for children and other small, living things. It may destroy entire cities or countries with the press of a button, it may just wipe out all electronics or something. Either way, expect massive amounts of damage if it's ever used, hence why it's rarely done.

In Anime, this is subject to the Nuclear Weapons Taboo, and will invariably be something that isn't a garden-variety present-day nuclear weapon. Many Speculative Fiction Series similarly use Applied Phlebotinum in place of real weapons of mass destruction available today.

See also Artifact of Doom, Forgotten Superweapon and Wave Motion Gun. Person of Mass Destruction is when this is applied to a character. If it only destroys certain things, it's a Phlebotinum Bomb. If it's built into a famous real-world location, then it's a Weaponized Landmark. In a fantasy setting, expect a Fantastic Nuke. If a measurement or value is given to its power, expect it to use Hiroshima as a Unit of Measure.

For more on a type we can't discuss, see Atomic Hate.

Examples of Weapon of Mass Destruction include:

Han Solo: What the Empire would have done was build a supercolossal Yuuzhan Vong-killing battle machine. They would have called it the Nova Colossus… Galaxy Destructor or the Nostril of Palpatine or something equally grandiose… And you know what would have happened? It wouldn't have worked. They'd forget to bolt down a metal plate over an access hatch leading to the main reactors, or some other mistake, and a hotshot enemy pilot would drop a bomb down there and blow the whole thing up.