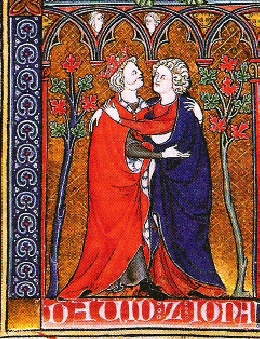 Even The Middle Ages were gay for David and Jonathan.

Nobody knows quite why, but sometimes a work resonates really strongly with the LGBT community. Maybe it was intentional Fan Service. Maybe it was merely unintentional Fetish Fuel. Or maybe just relatable Character Development of an Audience Surrogate (whether intentional or not). But for some reason, a sizable LGBT fanbase develops, out of proportion to their population in the world at large. This is Fan Yay.

When Fan Yay was unintentional:

Not all Fan Yay is unintentional; quite a bit revolves around canon gay or bi characters or relationships.

Fan Yay tends to manifest itself not just in Fan Art and Fan Fiction (not to mention the ubiquitous Rule 34), but occasionally also in Broken Base, Unpleasable Fanbase or Internet Backdraft. Ho Yay can be considered a subtrope of Fan Yay when the fans are gay, but Yaoi Fangirls and Yuri Fans do that too. But whichever way you put it, the fans are here, and the fans are queer.

When editing examples, keep in mind that Fan Yay doesn't have to be unintentional. Also, Ho Yay by gay fans should go in that article, unless there's more that the gay fanbase especially likes besides just the Ho Yay.

The following works have developed a definite Fan Yay:

Retrieved from "https://allthetropes.org/w/index.php?title=Fan_Yay&oldid=1804292"
Categories:
Cookies help us deliver our services. By using our services, you agree to our use of cookies.