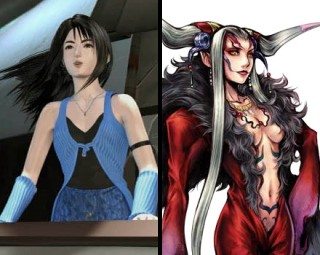 The lady on the right is evil, because more of her boobs are showing.

Just as good and evil can be Color Coded for Your Convenience, you can also tell them apart as heroes dress sensibly (more or less), and villains dress in skimpier outfits.

Although it's not that common nowadays, this likely started as a form of Getting Crap Past the Radar. "It's okay if they dress immorally. They're the bad guys! (wink)"

This trope doesn't require the good guys to dress like prudes, nor to never put on revealing clothing (because, you know, Fan Service). It's just that their regular outfits are significantly less skimpy than what the villains wear (and the heroes can dress like that with an Evil Costume Switch).

The exact way an outfit is skimpier can vary. It can be anything from being more form fitting to outright Stripperific.

A Sub-Trope of Dress-Coded for Your Convenience. May overlap with Make-up Is Evil.