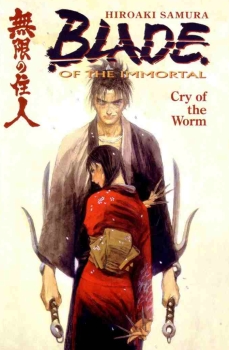 Blade of the Immortal is set in 18th-century Japan and is the story of a young girl named Asano Rin and Manji, her Badass bodyguard. Manji is immortal thanks to an infestation of kessen-chu, sacred worms that pervade his system and knit together any injuries he sustains. He can die only by beheading or by coming into contact with a particularly rare poison. His goal in the series is to remove the curse of his immortality, which will happen if he kills 1000 evil men in reparation for the 100 innocents he killed as an outlaw.

Two years prior to the beginning of the story, Rin's father (a swordsmanship teacher) was murdered and her mother was brutally raped in front of her eyes by the members of the Itto-ryuu -- a renegade sword school led by Anotsu Kagehisa. Rin vowed to track Anotsu down and kill him in revenge, and so she hired Manji to help her fulfill her quest. The series follows Rin and Manji as they travel through feudal Japan, fighting members of the Ittou-ryuu and other enemies, and meeting comrades with questionable morality of their own.

Tropes used in Blade of the Immortal include:
Retrieved from "https://allthetropes.org/w/index.php?title=Blade_of_the_Immortal&oldid=1911307"
Categories:
Cookies help us deliver our services. By using our services, you agree to our use of cookies.