But What About the Astronauts? 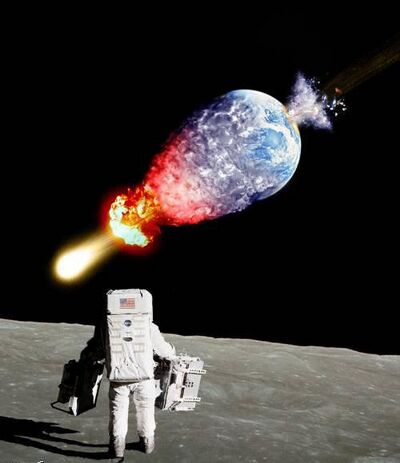 *sigh* So much for the homecoming party...

Something really bad (Alien Invasion, The Virus, Nanomachines etc.) happens to everybody on Earth, but the survivors have forgotten that for several years now, there have always been at least three humans not on Earth. This trope is a common way to have people survive an After the End situation. It can sometimes involve experimental or accidental off-Earth time travel, where the astronauts are only gone for a brief moment, and pass right over Armageddon to come back to a ruined Earth. If something is explicitly said to affect "everyone on Earth", this may be a form of Prophecy Twist. Furthermore, in science fiction/superhero stories where Earth has been radically changed, the astronauts in space are usually unaffected and are a vital resource for the heroes to find a way to bring the planet back to normal.

This is more likely to be if the aftermath of the disaster is the main setting for the plot. One way or another, someone has to miss the apocalyptic party or you're a bit stuffed for characters. Having the characters not be on the Earth at the time is one way to make this happen. Compare After the End. To clarify, the trope is that people in space survive an After the End situation. Other survivals of After the End are not a part of this trope.

Wondering about Real Life? Well the people onboard the International Space Station rely on constant resupply from Earth so their prognosis for staying there is grim. Air, water, food, all are shipped in. Over a longer term space is currently not good for your health between higher radiation levels and the effects of zero-g. So the astronauts only have months to live. However the station has lifeboats in the form of Russian Soyuz spacecraft so they in theory could return to Earth. And other space missions could as well. Without Mission Control though it is of course more dangerous, no one can double check if your reentry plan makes sense for example. Or won't strand you in the middle of the ocean. Mechanically though its completely possible for spacecraft to return to Earth safely, so those astronauts might make it back. Assuming there's an Earth that can still support them.

Examples of But What About the Astronauts? include:

"The Aniara Fleet." That's what some of the crews of Commercial Security were calling themselves. Aniara was the ship of an old human myth, older than Nyjora, perhaps going back to the Tuvo-Norsk cooperatives in the asteroids of Earth's solar system. In the story, Aniara was a large ship launched into interstellar depths just before the death of its parent civilization. The crew watched the death agonies of the home system, and then over the following years — as their ship fell out and out into the endless dark — died themselves, their life-support systems slowly failing.

Some people made it through. They were the ones who'd already left the surface of the Earth, moving into space habitats and colonies. Primitive, ramshackle affairs, barely self-sufficient, but enough to keep them alive while they coped with the loss of the Earth, and the numbing psychic trauma of what had happened.

You are the children of a dead planet, earthdeirdre, and this death we do not comprehend. We shall take you in, but may we ask this question--will we too catch the planetdeath disease?