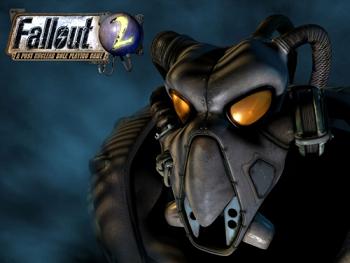 The second game in the Fallout series. This installment improves much upon its predecessor, being a game where you can do just about anything within reason. Numerous pop culture references make this game a troper's best friend.

The tribal village Arroyo is an okay place to live. Aside from trading caravans that come by every once in a blue moon, you and your family, the tribe, are completely isolated from the outside world and live a peaceful and simple life. But nothing is ever that simple.

Several failed harvests and the death of the majority of the Brahmin herd have taken quite a toll on the tribe, and its members are now slowly withering away from starvation and diseases. However, ancient holotapes speak of one thing that might be the key to salvation: the legendary Garden of Eden Creation Kit, which is said to be able to bring life to even the driest of deserts. Arroyo needs someone to leave the village and search for the GECK. That someone is you.

You are The Chosen One, the grandchild of the Vault Dweller from Vault 13. Eighty years ago, your ancestor ventured out to save his vault, and later ended up founding the tribe. Dressed in your great ancestor's old Vault jumpsuit and carrying the only lead on your target (a Vault 13 flask), you now must journey out and find a trader named Vic in the nearby settlement of Klamath. He might know where you can find Vault 13, which possibly has a GECK...

Or you could just give in to the temptations of the huge, open world that now lies in front of you, and do whatever you want.

We here at Vault City All The Tropes love making lists:
Retrieved from "https://allthetropes.org/w/index.php?title=Fallout_2&oldid=1692898"
Categories:
Cookies help us deliver our services. By using our services, you agree to our use of cookies.