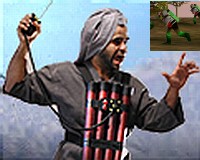 "I will die for our cause!" Wait a minute, what cause?

A cousin to Taking You with Me and a technique used by the Cornered Rattlesnake, a Suicide Attack is a type of attack where explosives are strapped to a person's body and detonated, or put in a car or truck and driven by the would-be suicidee and detonated. Truth in Television, needless to say (terrorists do this all the freakin' time.)

Some involuntary instances are cases of Why Am I Ticking?.

Action Bomb is when this is treated as a Heroic Sacrifice rather than a case of We Have Reserves. Unlike Why Am I Ticking? (where the person rigged with explosives has been so rigged against his or her will, and is perhaps unaware of it until the kaboom) it's voluntary either way. When the trope is considered to be Suicide Attack, though, the bomber has usually been indoctrinated to believe it to be noble and just;[1] needless to say, this means that the Suicide Attacker is more often than not a terrorist suicide bomber, or a mook for an Evil Empire that has reserves, and either way they're a Card-Carrying Villain. (The Redshirt Army sometimes uses Suicide Attacks too, though if the good guys are resorting to this, the work is probably using Grey and Grey Morality at best.)

An Action Bomb is the straight-up heroic version, who blows himself up to make absolutely certain that his explosive is killing the Big Bad or one of his most dangerous subordinates, or outright destroying the Big Bad's lair/superweapon/plans/army/evil stuff. Furthermore, the Action Bomb resorts to this after considering all other options and deciding that they just won't do enough damage to the enemy in a timely enough fashion, or more commonly, when circumstances such as being under attack or captured by the bad guys prevent the formulation or execution of a less risky plan. Finally, the Action Bomb sometimes survives his attack, while the Suicide Attack is in virtually all cases Exactly What It Says on the Tin.

Examples of Suicide Attack include: