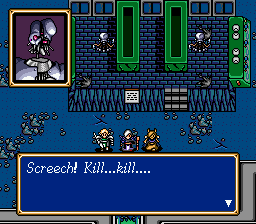 Congratulations kid! You've got your first Robot Buddy, Ridiculously Human Robot, or Do-Anything Robot! But before you start playing with it and going on magical adventures together, there's a few things you need to know:

Failure to follow any of the previous instructions may result in your robot going haywire, and spouting lines like "Crush. Kill. Destroy!" or "Kill All Humans!". In which case, it is highly recommended you hit the Override Command located in [the rest of the instruction manual appears to have been disintegrated.] If you have purchased the Mechanical Monster model, Trope Co suggests you start running now.[1]

Examples of Crush! Kill! Destroy! include:

Retrieved from "https://allthetropes.org/w/index.php?title=Crush!_Kill!_Destroy!&oldid=1882871"
Categories:
Cookies help us deliver our services. By using our services, you agree to our use of cookies.