Everything About Fiction You Never Wanted to Know.
(Redirected from Thief)
Jump to navigation Jump to search 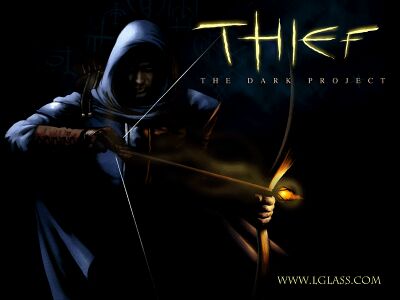 "What the hell is a taffer anyway ?"

Thief is a three-game series of first-person sneak-em-ups starring an Anti-Hero named Garrett as he goes about stealing stuff in an ancient, noirish and unnamed[1] medieval-esque/Steampunk city. Each game consists of a series of missions that begin with little or no connection to each other but eventually become part of an over-arching plot-line concerning Garrett saving the world from a great evil.

The series is especially notable for the relatively free exploration allowed within the boundaries of each scenario and the many ways the player can approach the given objectives. Self Imposed Challenges, such as completing objectives in as short time as possible or completely avoiding detection and confrontation, are popular among the more devoted fans. The games are loved for the convincing and engrossing atmosphere they create by taking usually Victorian Steampunk and giving it a dash of medieval flavor, making for a truly unique and interesting setting. The Thief series has a strong following and many elaborate fan-made scenarios have been created, some arguably surpassing the quality of the original ones.

This devotion eventually led to the creation of The Dark Mod, a total conversion for Doom 3, turning it into a stealth-based game like Thief with even more fan-made missions.

If you want to know how well-acclaimed and executed it is as a stealth game, Yahtzee refers to it as, "The only game series to have ever done stealth well"[2].

The installments in the series so far:

In May 2009, Eidos Montreál had confirmed the development of Thief 4 (stylized as THI4F), the next installment in the massively popular stealth action series.

All games can be found on GOG and Steam, so you don't have to fret about finding physical copies anymore.

The series also has its own Wiki.

Tropes used in Thief (series) include:

Not a house that GIVES you bad dreams, but the house is the one who dreams. And invites all within to STAY in those bad dreams...

In addition, the Game Mods mentioned above contain tropes not seen or as prevalent as in the main games. These include:

Retrieved from "https://allthetropes.org/w/index.php?title=Thief_(series)&oldid=1766141"
Categories:
Cookies help us deliver our services. By using our services, you agree to our use of cookies.