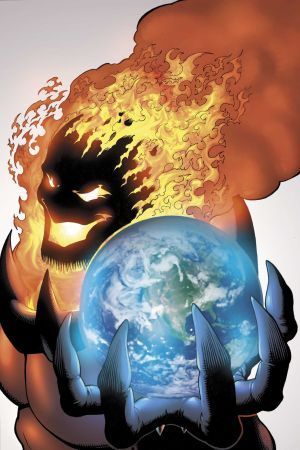 He's got the whole world in his hands.

A step above Galactic Conqueror but below Guardian of the Multiverse and Multiversal Conqueror, this villain rules an entire universe with an iron fist. Sometimes several universes. He's ready to add ours to the list, just as soon as those pesky heroes from Earth are out of the way.

Dimension Lords are usually demons or cosmically powerful mages, or have access to such a high level of Applied Phlebotinum that their technology might as well be magic. They may be gods or Eldritch Abominations. Their universes may be seriously large, or may be pocket dimensions not much larger than, say, Earth. (Don't mistake someone who only rules a single planet -- say, a parallel Earth -- for a Dimension Lord just because that planet's in another dimension; the true Dimension Lord rules his entire universe, regardless of its size.) It's still fairly impressive. Despite their nigh-infinite real estate, minions, and personal power, though, Dimension Lords seldom have any more success with their evil plans than do lesser villains.

Note that unlike the Evil Overlord, the Dimension Lord is often the legitimate ruler of his dimension.

If the Dimension Lord gets too ambitious, he often becomes the Multiversal Conqueror.

Councils Of Angels/Celestial Paragons and Archangels and Demon Lords and Archdevils are often dimension lords, as are physical gods who don't rule the entire multiverse.

Examples of Dimension Lord include:

Retrieved from "https://allthetropes.org/w/index.php?title=Dimension_Lord&oldid=1707339"
Categories:
Cookies help us deliver our services. By using our services, you agree to our use of cookies.