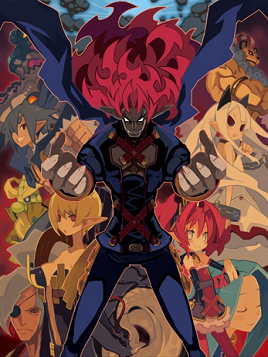 Continuing the tradition of wacky Turn-Based Strategy RPGs started by Disgaea and Phantom Brave, Nippon Ichi Software released Makai Kingdom in 2005. It's the story of 'Badass Freakin' Overlord' Zetta, who accidentally destroys his own Netherworld by torching a Cosmic Keystone called the Sacred Tome. In order to save himself, he seals himself inside the book before it's completely ruined. Reduced to a sentient tome with no home, no resources and no body, Zetta is forced to enlist the help of his fellow Overlords in a bid to get his netherworld back.

Now has a PSP port, including an alternate storyline involving a new character, Petta. Although it has no plans for a western release.

Tropes used in Makai Kingdom include:

Retrieved from "https://allthetropes.org/w/index.php?title=Makai_Kingdom&oldid=1897092"
Categories:
Cookies help us deliver our services. By using our services, you agree to our use of cookies.