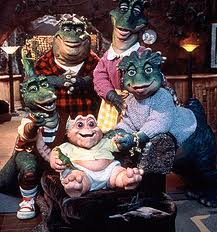 Dinosaurs was a show created by Jim Henson (or at least his production company, since he died when the show was still in pre-production) that aired on ABC in the early '90s. Basically it's The Flintstones meets The Simpsons, and yeah, they're dinosaurs! It followed the adventures of the Sinclair family: Earl, the not-too-bright blue collar dad; his wife, long-suffering Fran; and their three kids, typical teenager Robbie; naive middle daughter Charlene; and catch-phrase spouting Baby. Many of the episodes parodied modern society and issues, like the environment and family problems.

If you were looking for the animals, see Stock Dinosaurs.

Tropes used in Dinosaurs include:
Retrieved from "https://allthetropes.org/w/index.php?title=Dinosaurs&oldid=1818932"
Categories:
Cookies help us deliver our services. By using our services, you agree to our use of cookies.