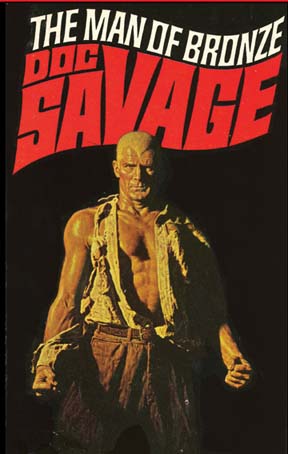 After the commercial success of The Shadow, the Street & Smith publishing company decided to try putting out another single-character Pulp Magazine in the same vein, but not too similar. Lester Dent was chosen as the primary author on the strength of a Shadow fill-in novel he'd been asked to write (much later adapted by that series' author as "The Golden Vulture.") Writing under the name "Kenneth Robeson", Dent created one of the classic pulp characters, who ran in his own magazine from 1933 to 1949. A total of 181 issues appeared.

Doc Savage was Clark Savage, Jr., raised from birth to be the pinnacle of human physical and mental achievement, and to use his gifts for the good of all mankind. (This being the pulps, pursuing that goal largely meant smashing criminals and warlords.) Doc was often called the Man of Bronze because of his well-tanned skin, coppery hair and gold-flecked eyes. He was a near-giant in stature, yet so perfectly formed that people only noticed his size when comparing him to nearby objects.

But despite Doc's amazing prowess in science and athletics, he was still only one man. So he gathered a team of five companions, each expert in their own field and totally dedicated to Doc's cause.

Doc's lovely cousin Patricia Savage sometimes joined their adventures, but was never considered a core member of the group.

Doc Savage also had a Radio Drama, more than one Comic Book series, and The Movie. He was a big influence on later pulp and comic book superheroes, including Superman (who borrowed, among other things, Doc's Arctic Fortress of Solitude), and Batman (who took on the renaissance man traits).

The following tropes are common to many or all entries in the Doc Savage franchise.
For tropes specific to individual installments, visit their respective work pages.
Retrieved from "https://allthetropes.org/w/index.php?title=Doc_Savage&oldid=1906024"
Categories:
Cookies help us deliver our services. By using our services, you agree to our use of cookies.