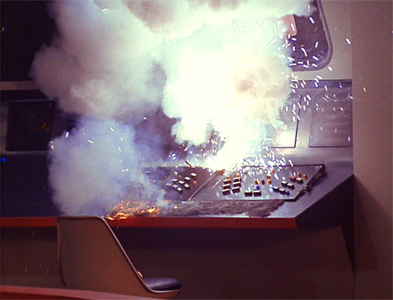 Circuit-breakers are for pansies.

Explosions look cool. As a result, in the future (and sometimes in the present) there are no such things as fuses or circuit breakers, and every control panel, sensor, and shield has C4 built into it. That way, if Readings Are Off the Scale, the user will be sure to notice. Also, no matter how deeply buried inside a ship its bridge is, you are guaranteed a shower of sparks and a deadly explosion when the enemy gets through its shields, or if some other disaster befalls the ship.

An unrealistic but effective way of showing battle damage when you don't have the budget to mess up a miniature or—in modern works—create damaged versions of CGI models.

Considering that the bridge of a ship simply has things like fuel gauges and computer terminals, the odds of a control panel exploding is pretty unlikely. The only logical thing that might explode on a bridge would be if a nearby fuel line was ruptured overhead. It might be more likely if the Explosive Instrumentation was in the engine room, where it would be a nerve center of power lines and fuel lines.

A Super-Trope to Readings Blew Up the Scale.

Compare No Waterproofing in the Future, Holographic Terminal (which doesn't explode—just get spammed with pop-ups).

Examples of Explosive Instrumentation include:

Retrieved from "https://allthetropes.org/w/index.php?title=Explosive_Instrumentation&oldid=1824138"
Categories:
Cookies help us deliver our services. By using our services, you agree to our use of cookies.