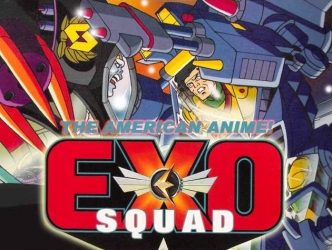 A Western-made Humongous Mecha series produced in 1993 by Will Meugniot, Exo Squad takes place sometime in the 22nd century, when Humans have fully terraformed and colonized Venus and Mars. The Neosapiens, an artificially-engineered race, have Turned Against Their Masters and launched an invasion of Earth and Venus.

The story focuses on the ExoFleet, the Homeworlds' space navy, in particular, Able Squad, a group of Exo-frame (Mini-Mecha) pilots led by Lieutenant J.T. Marsh.

Exo Squad has been commonly compared to Mobile Suit Gundam, both in quality and the maturity of the themes portrayed in the series. In addition, Will Meugniot himself made a direct comparison to the Gundam series, saying that Gundam is similar to the Pacific Theater of World War II, while Exo Squad is the European Theater. Among animation fans, it's often compared with Gargoyles, Batman: The Animated Series, and Avatar: The Last Airbender as an example of how Western animation can be every bit as mature and well-made as the best Anime. Surprising, considering what studio was behind the animation

A division of DVD and airing rights between a few companies, including Disney, prevented Exo Squad‍'‍s release for quite some time--long enough that many fans thought that it would never happen. Releases finally began in April 2009, and there was much rejoicing (yay). The entire series is also currently (9/29/2011) available on Hulu for your viewing pleasure.

Tropes used in Exo Squad include:

Retrieved from "https://allthetropes.org/w/index.php?title=Exo_Squad&oldid=1756404"
Categories:
Cookies help us deliver our services. By using our services, you agree to our use of cookies.