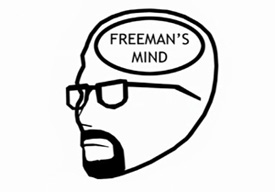 This is your brain on Gordon.

Freeman's Mind is a Machinima by Ross Scott that's somewhere between a Let's Play and an Abridged Series of the original Half Life. The series follows the rambling, eccentric and narcissistic thoughts of Silent Protagonist Gordon Freeman as he tries to survive the events of the game, showing us that perhaps it was for the better he kept his mouth shut. Imagine a one man Mystery Science Theater 3000 speaking as he goes through Half Life.

Check it out here.

The series, currently at 43 episodes (41, plus two numbered "0" and "10.5"), totals about 5 hours and 13 minutes as of episode 39, but each episode runs about 7 and a half minutes on average and each episode ends at a point that you can stop watching and come back later. For people who have already played through Half Life, this series is past when Gordon is captured and left in the compactor - the last episode, 41, had Gordon managing to escape the bio labs. Examples Are Not Recent, but the most recent as of this writing was released on May 4, 2012.

Now has a recap page in need of some love.

Tropes used in Freeman's Mind include: