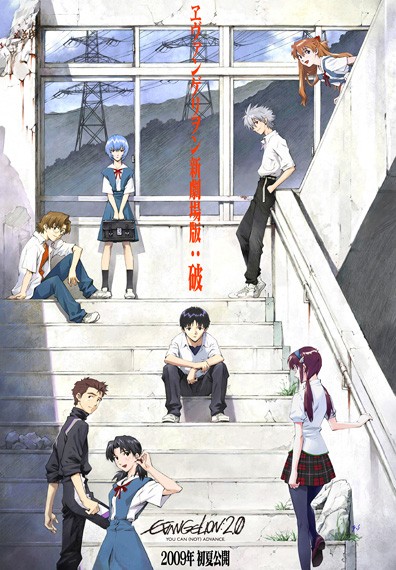 In 1995, Hideaki Anno -- fresh out of rehabilitation caused by problems during the production of Nadia: The Secret of Blue Water -- started work on what was originally planned to be a mecha otaku's ultimate dream. Following his increasing disappointment in (and hatred for) the Otaku community, as well as issues in his personal life and Gainax's financial troubles, Anno transformed the show into the infamously brutal, often depressing deconstruction of the Super Robot Genre (and many common anime tropes) that is Neon Genesis Evangelion.

Fast forward to 2007: Hideaki Anno is Happily Married, as rich as Steven Spielberg, and arguably more respected than ever before by virtue of having created what could damn well be considered the most popular and influential anime franchise of the past decade. So, he decides to revisit the work that made him famous -- only without the depression influencing the story -- and makes plans to re-tell the story of the Evangelion saga by giving his Byronic Hero cast a second chance (literally or figuratively), making them somewhat more emotionally stable, and actually giving them hope and light at the end of the tunnel. A massive theatrical budget doesn't hurt, either.

Thus begins the salvation of Shinji Ikari, Rei Ayanami, and Asuka Langley Shikinami in the four-film saga known as Rebuild of Evangelion, directed by Kazuya Tsurumaki of FLCL fame. Two of the films have already been released; the third film is scheduled to be released in fall 2012, and the final film will be released in 2013.

The films in this series are as follows:

While Rebuild is by no means Lighter and Softer (the Nightmare Fuel remains just as soul-shattering in its intensity and horror as the original, if not more), if the tone of the second movie's ending holds true, this retelling promises not to be the suicide fuel that the original Evangelion was. Rebuild can best be characterized as the original staying on its medication: ultimately no happier than before, but a hell of a lot more stable.

If you choose to continue reading, you can (not) avoid being spoiled. You Have Been Warned.

Tropes that are (not) in the original series, and are only seen in the Rebuild saga include:
Retrieved from "https://allthetropes.org/w/index.php?title=Rebuild_of_Evangelion&oldid=1962837"
Categories:
Cookies help us deliver our services. By using our services, you agree to our use of cookies.