Everything About Fiction You Never Wanted to Know.
(Redirected from I'm a Marvel And I'm a DC)
Jump to navigation Jump to search 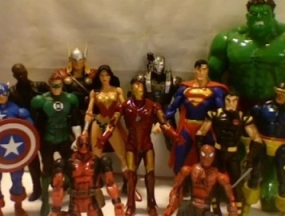 I'm a Marvel... and I'm a DC is a popular Fan Film series on YouTube, created by ItsJustSomeRandomGuy and his former collaborator, who goes by ItsJustSomeRandomGal. The videos feature popular Marvel Comics and DC Comics characters (well, action figure versions of them, anyway) dealing with the successes and failures of their respective movies and comics, sometimes humorously, sometimes dramatically.

There are five main sub-series of videos in this series: