Died Happily Ever After 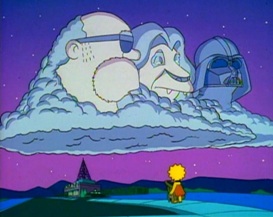 Sometimes Heaven has a mentor surplus.

Oh no! The Love Interest, Mentors, parents, little sister, or another emotionally significant character to the hero has been killed by the villain. Woe! However, it's ok. Because the Big Bad has been beat, and their souls can rest peacefully in Fluffy Cloud Heaven. To demonstrate this, their ashes, ectoplasm, or even (and this one's popular) the clouds themselves form into their faces, and smile serenely down at our (still living) heroes before fading away to their eternal reward. Typically a Heartwarming Moments.

Common in children's movies where you get a Death by Newbery Medal, and sentimental films in general.

Peaceful in Death may be a mundane (or ambiguous) alternative.

Contrast Go Out with a Smile, Dying as Yourself.

Examples of Died Happily Ever After include:

"If you find yourself alone, riding in the green fields with the sun on your face, do not be troubled. For you are in Elysium, and you're already dead!"