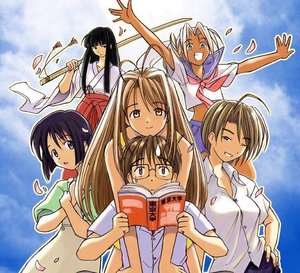 A classic in Harem/romance subgenre, Love Hina tells the story of clumsy loser Keitaro Urashima, a Ronin who has failed three times to qualify for Tokyo University. He is driven to make it into Todai because of a promise he made to a little girl fifteen years before -- they would both go to Tokyo University, get married, and live happily forever after.

It would probably help if he could actually remember who the little girl was, but he has only the vaguest memory of what she looked like, and no memory whatsoever of her name.

His parents are disgusted with his persistent failure and refuse to support him through another year's study and testing. But his grandmother, the owner of Hinata House, a hot springs resort, has offered to let him lodge there and study while she goes on a round-the-world trip. Keitaro leaps at the chance.

When Keitaro arrives at Hinata House, he discovers that his grandmother has left already without leaving any instructions, and worse, failed to warn him that the former resort is now a girls-only dormitory. The inhabitants are less than pleased with the incursion of a "perverted male" into their domain, but he eventually convinces them to let him stay, on sufferance and with much vigilance on their part against any future misbehavior.

Through the course of the 14 volume manga, and its 25-episode anime, two movies, and a three-episode miniseries, Keitaro not only wins over the girls of Hinata House, he finds self-confidence, a career, love and his promise girl. Just not all at the same time. And he has an extremely painful time achieving all of the above.

Thought by many to be the archetypal example of the harem genre, Love Hina is a comedy with a dramatic thread running through it. The story has a strong ensemble cast that adeptly brings together a wide variety of characters and character types into what can arguably be called a family. As one of the first anime to be produced entirely on computers, the art is crisp and clean and never suffers from the usual loss of quality that can affect traditionally-animated series during deadline crunches. Although Keitaro is subject to a large amount of cartoonishly slapstick violence at times, it is not just a love story but the story of his growth into an adult.

Compare with Maison Ikkoku. Contrast with Mahou Sensei Negima (by the same author, and implied to be in the same universe.)

Tropes used in Love Hina include:
Retrieved from "https://allthetropes.org/w/index.php?title=Love_Hina&oldid=1729168"
Categories:
Cookies help us deliver our services. By using our services, you agree to our use of cookies.