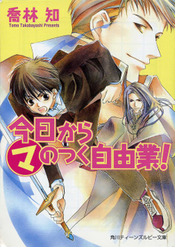 Shibuya Yuuri was an Ordinary High School Student with no truly outstanding features aside from his love for baseball. At least, he was, until he tried to break up the bullying of another student and was dunked in a toilet, which sucked him into another reality -- one in which his black hair and eyes marked him as the successor to the title of Maoh, or Demon Lord. Unfortunately for Yuuri, he has no knowledge of this kingdom, its customs, or how to go about ruling it... should he even survive to his coronation. Fortunately, he promptly meets a large number of hot guys willing to help him out.

Despite its sometimes serious veneer, Kyo Kara Maoh is first and foremost a comedy, though it grows into an adventure as the story progresses. Even the Yaoi Guys scenario of Yuuri ending up engaged to Wolfram is played for laughs -- please don't slap someone unless you mean it. Along with Wolfram's brothers (Gwendal and Conrad), their mother Cheri, and a few other noteworthy mazoku (lit.: demon tribe), Yuuri might just live long enough to be acknowledged as Maoh and bring peace to the world which is currently split along human/mazoku lines... But is fomenting peace really what a Demon Lord should be doing?

Kyo Kara Maoh started off as a series of light novels (ongoing), and was made into a manga series (also ongoing), a TV anime series, an OVA and a PlayStation 2 game. The details in each version are slightly different.

Remember to put character tropes on the character page.

Tropes used in Kyo Kara Maoh! include:
Retrieved from "https://allthetropes.org/w/index.php?title=Kyo_Kara_Maoh!&oldid=1733419"
Categories:
Cookies help us deliver our services. By using our services, you agree to our use of cookies.