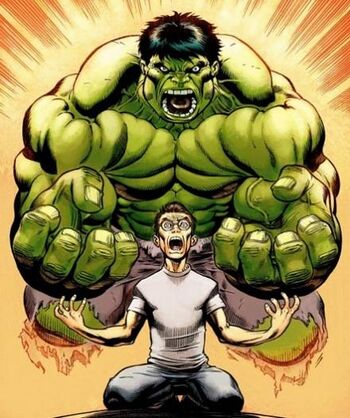 This trope is what happens at the intersection of You Wouldn't Like Me When I'm Angry, Involuntary Shapeshifter and Unstoppable Rage. Generally the trope goes like this:

If the subject is female, there's a good chance that they'll become an Amazonian Beauty and/or a Statuesque Stunner.

For some reason, werewolves in modern fiction are often subject to this type of transformation, rather than (just) the full moon. Can involve a Super-Powered Evil Side or a Jekyll and Hyde scenario. Berserk Buttons are often involved as well. May result in a Heroic RROD.

Also known in some circles as "Retard Strength," for the phenomenon where mentally handicapped people can command a surprising amount of physical force and speed when stressed. This is generally attributed to the lack of emotional inhibitors to tell them that their actions are destructive.

Examples of Hulking Out include:

Retrieved from "https://allthetropes.org/w/index.php?title=Hulking_Out&oldid=1890525"
Categories:
Cookies help us deliver our services. By using our services, you agree to our use of cookies.