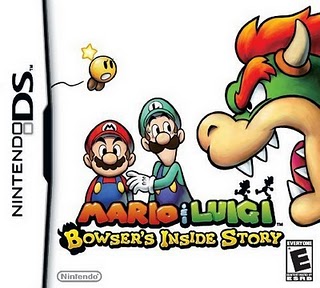 The third game in the Mario & Luigi RPG series, released in 2009 for the Nintendo DS. Its Japanese name is "Mario and Luigi RPG 3!!!".

A mysterious disease, the Blorbs, is causing Toads to swell into giant balloons. In a bid to capture Princess Peach and use her power to claim the Darkness Power of the Dark Star, Fawful tricks Bowser into miniaturizing most of the toads in Peach Castle and sucking them into his own body. The Dark Star is buried beneath the Mushroom kingdom and seems to be the cause of the Blorbs.

With Peach, Mario and Luigi trapped inside Bowser's body, Fawful takes over Bowser Castle, capturing some of his minions and brainwashing the rest. Bowser embarks on a journey to take back his palace and free all his minions. Meanwhile, Mario and Luigi aid him from inside his body when necessary in the midst of collecting the three Star Cures needed to counteract the Dark Star.

One of the quirks of the game is that Bowser can't be controlled unless Mario and Luigi are inside his body. That's because of the new mechanic of the Vacuum Block, which allows Bowser to suck up smaller enemies or, less frequently, parts of the enemies that temporarily raise Bowser's stats. When Bowser is ingesting entire enemies, the screen cuts away to a battle inside Bowser between the Bros. and the enemy. After this battle is over, the outer battle resumes (unless Bowser ate the last enemy). Notably, this is the only way that Mario, Luigi, and Bowser can fight against common enemies in the same battle. Another feature is that while most of the world is the same format as the previous two games, a top-down view of the world, all the stages inside Bowser's body are 2-D, side-scrolling levels.

Tropes used in Mario & Luigi: Bowser's Inside Story include:

Just to clarify, these are the Shroobs' stats in Partners in Time:

Now here they are in Bowser's Inside Story:

...Yeah. Apparently being frozen in ice does that to some people. (Credit goes to Super Mario Wiki for this edit)

Retrieved from "https://allthetropes.org/w/index.php?title=Mario_%26_Luigi:_Bowser%27s_Inside_Story&oldid=1881027"
Categories:
Cookies help us deliver our services. By using our services, you agree to our use of cookies.