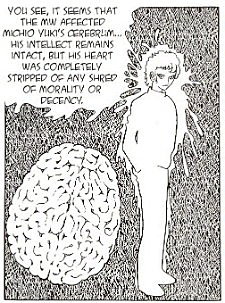 MW is a manga by Osamu Tezuka, the creator of Astro Boy. It ran from 1976-78 in the Seinen magazine Big Comic.

Garai was part of a gang that kidnapped the young Michio Yuki. After hiding out in the mountains overnight, they find themselves the sole survivors of a leak of the eponymous chemical warfare agent, MW. Fast forwards 15 years: Garai, in penance, has joined the priesthood; Michio, for his part, has become an exceedingly attractive and charismatic but utterly amoral criminal, and Garai's lover, much to Garai's distress. The plot follows Michio as he attempts to hunt down the current location of the MW gas, and Father Garai and Detective Meguro as they attempt to hunt down Michio.

This is not an abbreviated article of the Modern Warfare series, by the way.

Tropes used in MW include:

Retrieved from "https://allthetropes.org/w/index.php?title=MW&oldid=1692685"
Categories:
Cookies help us deliver our services. By using our services, you agree to our use of cookies.