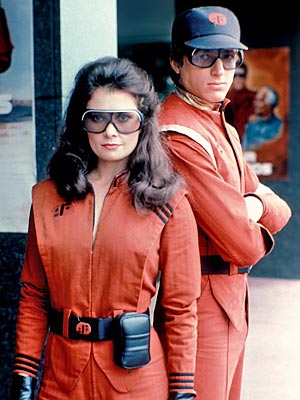 A militaristic alien starfleet arrives on Earth from Sirius, and its people, human-like aliens, appeal to Earth to help produce chemicals to save their dying world. As months go by, the so-called Visitors infiltrate every level of human society. But a select few become suspicious; forming a resistance, they soon discover the truth -- the Visitors are not like us, they are not our friends, and they don't want our help; they want our water. And other things.

Originally aired as two miniseries and a one-season regular series, V is, in the words of creator Kenneth Johnson, a story of power -- how different people react to it, and how they react to those who have it. It is an unabashed metaphor for the rise of Nazism prior to World War II; in fact, the story was originally to be a direct allegory involving a home-grown fascist regime being elected to govern the United States, based on Sinclair Lewis's It Can't Happen Here, but NBC wanted a sci-fi show since Star Wars had been such a hit.

The story is told in several interweaving arcs, each following a different set of characters (not unlike The Lord of the Rings or many disaster films of the 1970s) as their individual plotlines eventually merge and they unite to combat the all-powerful evil.

V (1983): Fifty three-mile-wide spaceships take positions over key cities of the world. The aliens reveal themselves to be human in appearance (but with an electronic voice effect), and ask for help to save their doomed home planet. As they weave their way into society, biologists, archaeologists and scientists of similar fields begin disappearing; and a med student, Julie Parrish, organizes a small resistance.

Meanwhile, news cameraman Mike Donovan also grows suspicious and sneaks aboard the Mother Ship where he discovers the aliens' secret: they're really humanoid reptiles. He also learns that they've come to steal Earth's water and to harvest humans for food. The Visitors use their contrived influence with human governments to institute martial law, effectively taking over the world. The Visitors attack Donovan's home town and kidnap his family; meanwhile, in a biological "experiment", a kidnapped girl is impregnated by a Visitor. The rest of the miniseries focuses on the fledgling Resistance's struggle to become a significant threat to the Visitors' plans.

V: The Final Battle (1984): Moving forward several months, we find that the Resistance is still struggling a near-futile battle with the Visitors, and Robin Maxwell's alien pregnancy advances with no way to stop it. But the tide turns when the Resistance stages an attack on the Visitor admiral, unmasking him on live television. Unfortunately, leader Julie is captured and put through a brainwashing "conversion chamber", though she is later rescued. Robin eventually gives birth to twins, one a human-like girl and the other a reptiloid with blue eyes. The reptile dies, and a bacterium is found in its system. The girl, Elizabeth, quickly molts into the body of an eight-year-old, after which she is taken to the Visitors by a priest who believes she is a bridge of peace. He is killed for his trouble and Elizabeth stays with the Visitor leader Diana.

Meanwhile, the bacteria which killed the reptile baby is developed into a biotoxic weapon that will poison the Earth to the Visitors without harm to humans or the ecology. The Resistance mounts a bold attack to spread the so-called "Red Dust" into the atmosphere, but the villainous Diana has an ace -- a thermonuclear device in her spaceship that will destroy Earth. And so, as the Visitors withdraw from all over the globe, the Resistance must take over the L.A. ship and fly it into space before the Earthshattering Kaboom. But Elizabeth deactivates the bomb with hitherto unreferenced magical powers, saving the day.

V: The Series (1984-85): A year after the events of The Final Battle, Star Child Elizabeth molts again, into a 20-year-old. Diana escapes custody on her way to stand trial and flees into space where it is revealed that the Visitor fleet has retreated only as far as the moon. It is also revealed that the Red Dust not only has had an impact on Earth's ecosphere, but that it requires a sustained cold spell to reproduce, rendering it ineffective in warm climates (like Los Angeles). The Visitors re-invade Earth, and Diana quickly strikes a truce with businessman Nathan Bates, making L.A. a "free" city.

However, the core members of the original Resistance (now including Bates' son Kyle) are having none of that, and they reunite to cause mayhem and disrupt the Visitors at every turn. Eventually, after heavy casualties on both sides of the struggle, the Visitors' "Great Leader" arrives on Earth to call off the war and to take Elizabeth home with him. The cliffhanger ending reveals that Kyle, who has pursued a romance with the Star Child, has stowed away on the Leader's ship.

V: The Second Generation (2008): Written by Kenneth Johnson and ignoring the events of the second miniseries and the series, this new novel picks up the progress of the Visitor occupation of Earth some twenty years later, here in the modern day. Answering a distress signal from Earth (sent at the end of the first miniseries), a new alien race has arrived to help the humans win their freedom.

Not to be confused with V for Vendetta.

Tropes used in V (TV series) include:
Retrieved from "https://allthetropes.org/w/index.php?title=V_(TV_series)&oldid=1871696"
Categories:
Cookies help us deliver our services. By using our services, you agree to our use of cookies.