Badass in a Nice Suit 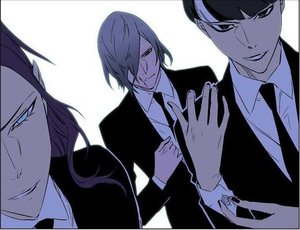 A Badass or criminal character will often dress conservatively (suit and tie) to imply that he is a "professional" who knows what he is doing. Generally partakes of a toned-down version of Badass Longcoat imagery; add Cool/SinisterShades to complete the look. The suit will usually be impeccable.

This trope can include women who wear traditionally male attire (read: suits), with the further implication that they are tough enough to make it in a man's world; see also Hot Chick in a Badass Suit.

One easy way of showing that a situation is getting worse or dangerous is to have the previously immaculate suit become messier somehow, generally with bloodstains or just having any unnecessary bits such as the tie or jacket taken off and the sleeves rolled up.

There are a few careers in which this style of dress ranges from common to near-universal: The Men in Black, Professional Killers of the Assassin variety, Corrupt Corporate Executives, Corporate Samurai, Amoral Attorneys, many Battle Butlers and Yakuza/mafiosi.

This trope does not cover flashy or eccentric suits worn as a fashion statement. Therefore, Spike Spiegel's and Lupin's blue and red leisure suits don't quite count. Jim Carrey's shoulder-padded yellow getup in The Mask is about as far from this trope as you can possibly get. Nor does it cover clothes that could probably kill you if you get too close.

A Sub-Trope of Stock Costume Traits.

Compare Tuxedo and Martini, Coat, Hat, Mask, Man of Wealth and Taste, Hot Chick in a Badass Suit, Battle Ballgown, Kicking Ass in All Her Finery, Bling of War.

Examples of Badass in a Nice Suit include:

Retrieved from "https://allthetropes.org/w/index.php?title=Badass_in_a_Nice_Suit&oldid=1926807"
Categories:
Cookies help us deliver our services. By using our services, you agree to our use of cookies.