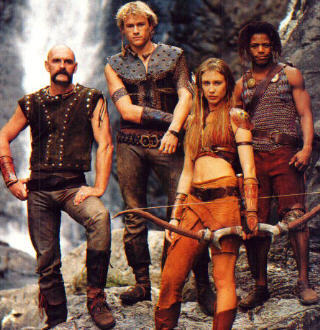 Roar was a short-lived FOX network show from 1997, the brain-child of Hardy Boys alum Shaun Cassidy.

Conor (Heath Ledger), a young Irish warrior, is trying to unite 4th century Ireland against the invading Romans. Longinus, leading the Romans, is secretly the cursed-to-be-immortal centurion who stabbed Christ at Calvary. The show freely mixed Christian tradition, Celtic Mythology, Druidism, and, barely, smatterings of history. And then there's the Roar. What heck is the 'Roar'? Did anybody ever figure it out?

Roar was not very well received and lasted less than one season, with only 8 of the 13 ordered episodes aired. The complete series is now available on DVD.

Tropes used in Roar include:

"Such drama. Are you sure you're not Greek?"