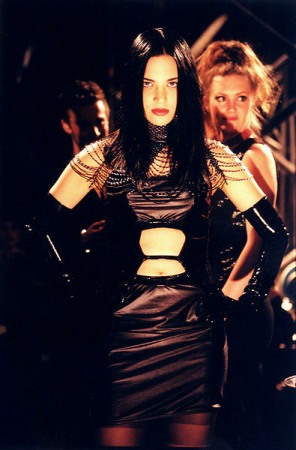 Where the Woman in White marks a mysterious but important character and the Lady in Red indicates the sexy yet morally questionable one, the Woman in Black is almost always scary and menacing.

While black in itself is a pretty common colour to find in Real Life's clothing, particularly among Goths and similar cultural movements, there is still something unsettling to a woman in all-black garb, especially if she's an Eerie Pale-Skinned Brunette. Extra points for red or dark lipstick and/or Femme Fatalons.

Strangely, the more skin the outfit covers, especially if it's a long dress, the more ominous the woman will become. Stripperific clothes seem to somewhat dim the effect of black, but don't outright negate it, as seen with Black Bra and Panties.

Not only does black outline the body even more than red, there are also all the ideas associated with the colour itself, such as death, night, evil, great danger, or refusal of sexuality (that one particularly if the clothes hide the whole body). Thus, it's a rare woman who can actually wear an all black outfit and not be at least an Anti Heroine.

Strangely, the trope is more the polar opposite of the Lady in Red than that of the Woman in White in terms of concepts. In fact, the Lady in Red brims with offers of quenching one's lust and gratifying sex, whereas the Woman in Black clearly conveys that desiring her is outright dangerous or forbidden or a free ticket to certain death.

As can be assumed, this trope is mostly associated with The Vamp, Femme Fatale, Magnificent Bitch, Vain Sorceress, Manipulative Bitch, The Baroness, or, in some extreme cases, a female Complete Monster.

Not to be confused with the Little Black Dress which is more a fashion item in itself than an indicator of character. (Usually) Compare Lady in Red, Woman in White, and Man in White. For the Susan Hill novel and related works, see The Woman in Black.

Examples of Woman in Black include:

Retrieved from "https://allthetropes.org/w/index.php?title=Woman_in_Black&oldid=1938068"
Categories:
Cookies help us deliver our services. By using our services, you agree to our use of cookies.